We adopted Diesel in 04. He’s in great health with his great atheltic build. He loves to retrieve in the water. We drive up to Shirlington dog park so our dogs can swim (we have Brier, too). I can’t believe he’s eight. We took a vacation with him in mind to Cape Cod so he could go to the beach and swim in the nearby lake. They went everywhere with us. We had a blast.

Anyway, I wanted to write you and let you know that we saved Diesel’s tail two years ago. In 2009, we went on a week long trip to Paris for our ten year anniversay. We have a great boarder. They have a large play area and the dogs play with each other during the day and then are put in runs at night. The owner has labs and is active in rescue. We liked that she knew our breed. When we got back, the boarder told us that he had chewed his tail and that he needed to go the vet right away. this time he was bleeding. I dashed him off to the vet and they bandaged his tail and sent me home. By the time I’d gotten home, he had wagged it off. So I called the vet again with “what-do-I do, now?”. They said to come back right away. I go back and they put on a new bandage with lots more tape. I thought that in a week his tail would heal and this would be no problem. But every time the vet told us we could try sans bandage, he’d break open his tail again.

Two months later, the vet looked at us, and said that we might want to consider amputation. I asked if there was still a possibility that he could keep his tail. The vet said yes and that it wouldn’t hurt his tail to keep it bandaged a while longer. So we did that to monitor it for a little while. Meanwhile, he was getting a new bandage every week like we’d done from the beginning. I really didn’t want to amputate. All I could think of was how much pain he’d be in and I wanted him to keep his tail. There’s blood all over my house, but I didn’t care. All I wanted was Diesel to be healthy again.

While he had his bandage on we couldn’t go to the dog park because he couldn’t get it wet or dirty. This happened over the summer which was good because Alan and I are teachers so we could closely monitor his tail. But now it’s getting close on to September, I really wanted him to be healed by the time we went back to school. My sister is vet tech and she was telling me how some dogs lose their tails to this and I had to be careful so that Diesel wouldn’t be one of them.

One day we’re in the grocery store and Alan suggests that we put a band-aid on it. I looked at him with the yeah-right look, but he said that band-aid didn’t have much mass and it would stay on for a little while. At that time, the vet said to take off the bandage, so we put a large band-aid on it instead. These band-aid are huge. They are about six inches across and about three inches wide. They’re really made for injury on someone’s leg. We took off the bandage and wrapped the band-aid around it like a tube. I gave it a bit of squeeze and watched him closely. Diesel is such a good boy. He never chewed his bandages. I was concerned that it would fall off again. The band-aids stayed on for three to four days. Then I’d just put on a new one. By this time it was another month later and Diesel’s tail was beginning to grow hair on the very tip and it didn’t show signs of bleeding. I was trilled. Before everytime he’d grow more hair, he’d bang it on something, the tip would open up bleed again and the vet would have to shave it. I never knew that hair protects those small blood vessels! We took him to vet and they were very excited and they told us to continue with our band-aids. His tail was looking so good. Then, one day I took off the band-aids and his tail looked brand new. What a relief.

I’ve been meaning to write LRR to let you know so that if anyone else has a problem with happy tail that they would know our solution. Diesel’s tail opened briefly last fall, so I right away put a band-aid on it and after a week it stopped and he’s been fine since.

He’s my best friend! I don’t what I would do without him. I’ve attach some pics of Brier and Diesel. One of them is with the bandages on.

Last year, we booked a trip on short notice and the boarder said that the only accommodations they had was the suite. It has a TV and a couch. It also has a Dutch door. They could have the Beagle Bungalow or the Lab Lounge. We booked it and Alan picked them up and called me to tell me that Diesel did not chew anything. The boarder also told us that he was much more relaxed. I’ve booked the suites from now on and Diesel is a happy camper. I guess all he needed was the comforts of home. The suites cost more, but I don’t care. He’s worth it. I’ve attached a few pictures of him that I’ve taken over the years.

Thank you for matching us up with him. 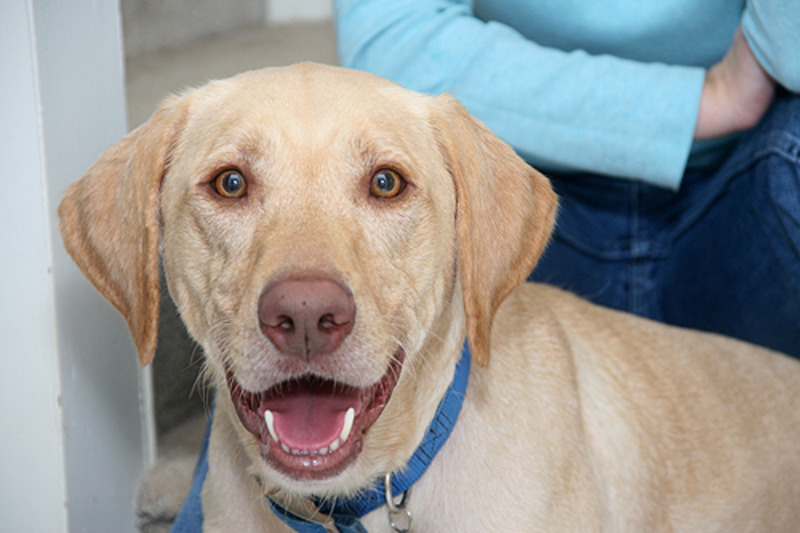 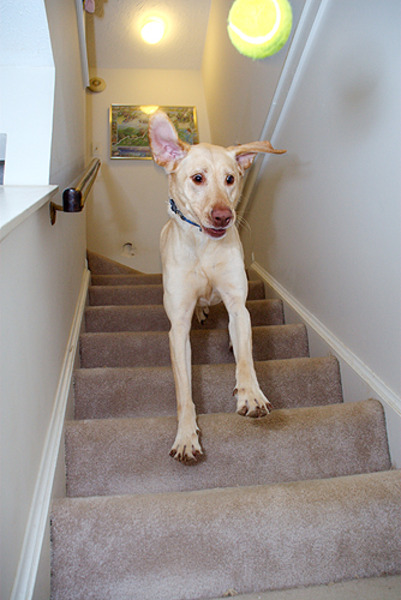 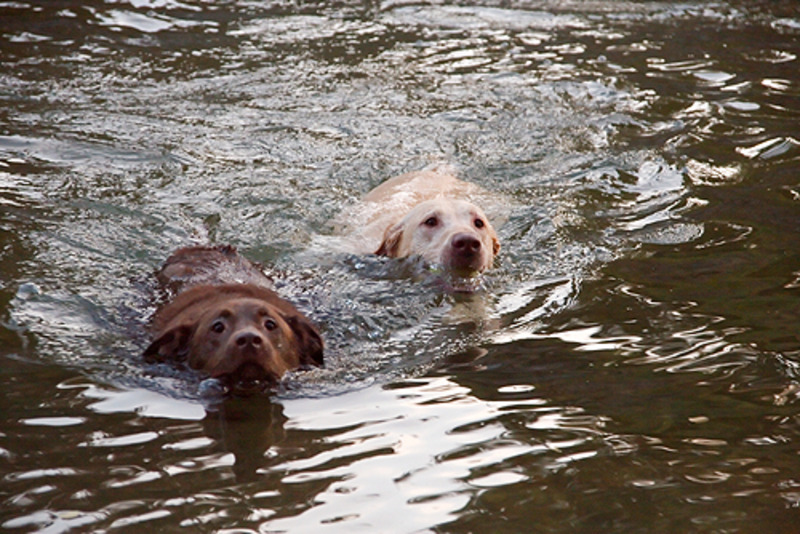 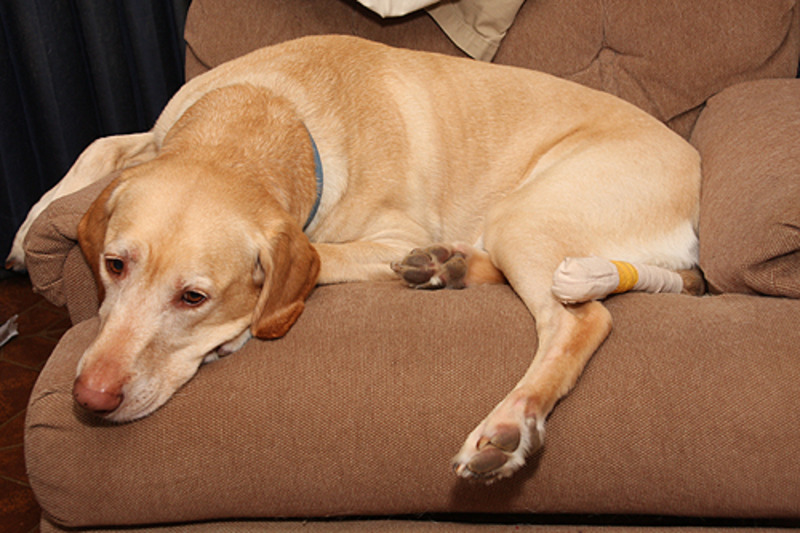