Chessie was surrendered to LRR in 1996 when her owners were unable to keep her within their invisible electric fence. The couple had applied to LRR previously and were insistent that they were going to keep their lab confined to the yard all day with such a fence. They would not listen to our advice and reasons against using an electric fence, and were quite upset when we rejected their application. They decided to buy a black female lab pup, and in less than a year of her constant escaping from this fence, they finally decided we were right and gave her up to us. About that time, we received a request for a lab suitable for training in law enforcement in the Tidewater, VA area. Chessie had exhibited good focus, drive, and fearlessness in retrieving, so we thought she might work for them. While testing for narcotics work, the officers discovered her fearlessness at diving into deep water to retrieve. Consequently, she was cross trained for both narcotics detection and underwater cadaver location. She went on to graduate near the top of her class. A short time later we were pleased to receive the following letter from her officer/handler: 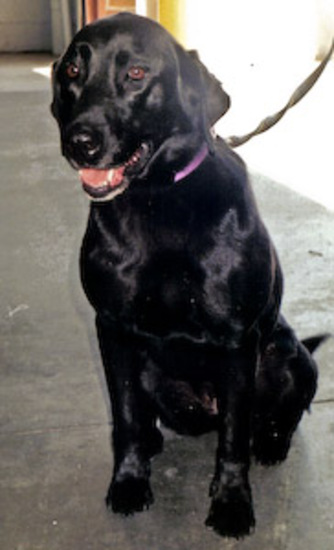 Chessie is a 4 year old black lab that came from your rescue in August, 1996. She was considered a candidate for police work, specifically to sniff out illegal drugs. Chessie and I started out learning the job together. She had no experience and neither did I at dog handling and training. There were six dogs in my school, and at the end, I had my choice of which one I would like to take. There was no doubt in my mind that it would be Chessie. During our 14 week school, I watched her excel beyond my highest expectations, graduating as one of two top dogs with the other going to my partner.

I have been a police officer for over five years now, and I can honestly say that I have never had such a wonderful and dedicated partner. Every time we go to work, she amazes me with her willingness and abilities. She has an important task to do and does it very well. She has made my job very easy by her abilities and natural talent. She has close to 100 narcotic finds in a little over two years, resulting in the seizure of over $1 million worth of drugs. She makes it a great pleasure to go to work each morning. She is always excited to see me first thing in the morning and runs straight to the van and gets into her crate. I am constantly telling people if they could teach her to answer a phone and drive, I would be unemployed! She makes a difficult job in police work very easy. I have already decided that as long as I am allowed, I will work with Chessie, and when time comes for her to give up her job, she has a happy and loving home waiting for her with me. 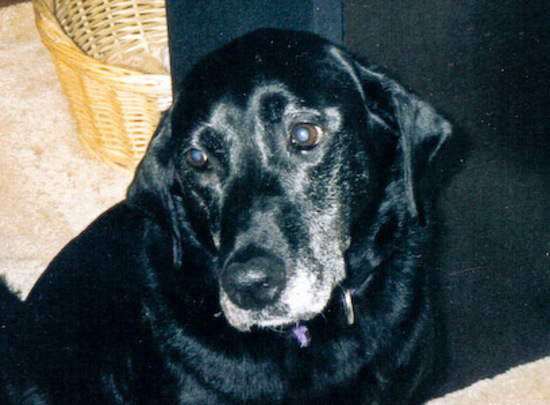 When it was time for Chessie to retire in 2002, her handler immediately adopted her from the police force, and she has been a part of his family since then. We were saddened to learn that in October of 2007, Chessie passed away due to cancer. We received this wonderful letter from her partner describing the Chessie’s life:

On Wednesday October 3, 2007, I lost my retired police K9 partner Chessie to cancer. She had been in ailing health over the last several months but she had been hanging on. On Wednesday, she was just much worse. The tumor was so large the vet could feel it on her stomach without any x-rays.

Chessie and I became partners in August 1996 until November 2002, when she retired and came to live with us as a family member. Chessie was more than just a pet to me. Chessie was with me on the job for 6 years and helped find millions of dollars in drugs. She always seemed to do the impossible and was always eager to please me.

There are so many stories that I could tell about Chessie that I will never forget. If any mistakes were made at work, it was generally that I was not listening to her like I should have. One of her biggest success stories was about a year before retiring, we were called to search a 2-story house for drugs. As a rule of thumb, Chessie and I pretty much went solo during a search and I relayed the results to investigators who then searched. Finding drugs to Chessie was a game of hide and seek. While searching the house, if Chessie could talk she would’ve said “Dad, their hiding EVERYWHERE!” After we finished, investigators asked me where Chessie was interested. I had to go through the house with them and point out many locations. Chessie was right. Drugs and drug money were all over the house in hidden locations (such as in the stove, pantry, attic, washer…) Upon leaving, investigators had located 3.5 kilograms of cocaine and over $90,000.

Another early success story came for her just after getting out of dog training school. We were called to search a house. Investigators had been to this house over 7 times in the past several months and searched but were never able to find any drugs. It had become so frustrating that the supervisor said that if no drugs were found this time, we would NEVER come back! Chessie searched the house will little luck. We then went to check the back yard, shed, and an abandoned car out back. As Chessie went to get in the abandoned car, she turned around in the driver’s floorboard and tried to crawl under the seat. The crack cocaine had been taped under the seat all the time and had just been missed up until now.

Chessie didn’t know holidays, but we did celebrate one holiday together working. I had just sat down to eat Thanksgiving dinner in 1997 at my mother’s house when my pager went off. Chessie and I were asked to come to the airport on a tip of inbound drugs on a flight. Chessie was eager to go as usual. As the luggage came down the belt, Chessie hopped up and began to run and sniff it all. She flipped around on two matching suitcases and started her drug celebration (scratching at them). As the suitcases went to baggage claim, a well-dressed female picked them up and was stopped by investigators. Upon initially talking with her, she seemed very calm, but Chessie had told us she knew better than the act. The woman and her suitcases were brought into a private room and she said we could look in the luggage, no problem. A total of 80 pounds of marijuana were located inside. The ironic part of the story was that the female later told police that she had made several drug trips to the area but had used another airport nearby. At the last minute, the supplier changed her plane ticket to our airport and said that there was too much police presence at the usual airport and that our airport was wide open and she would have no problems. Guess they didn’t need a big police presence when you had Chessie. 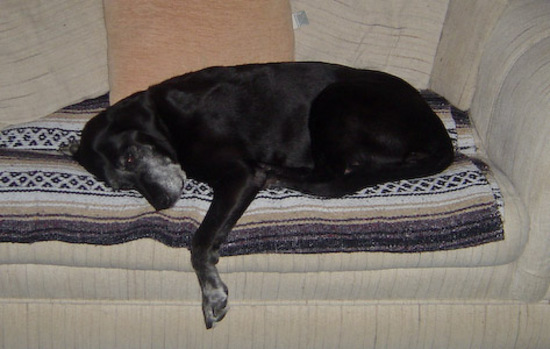 After coming home with me in retirement, Chessie developed a love for 2 things other than our family: food and blankets. Chessie loved to eat (what labs don’t) and she loved laying on blankets. All blankets in our house belonged to her. She layed on many blankets through her years. My wife would wash them, sometimes to Chessie’s dismay, she liked them just the way they were! My wife would open the dryer, call Chessie in the laundry room, and Chessie would pull it out of the dryer herself and drag it into the middle of the den floor and lay on it. One time my wife had washed the blanket that goes on our bed and folded it and put it in our laundry basket to take upstairs. We came in the room a couple minutes later and Chessie had climbed into the laundry basket and was laying on top the blanket. Glad we convinced her to let us “borrow” it!

Over the last year or so, she always woke me in the middle of the night because she had to go outside. I never yelled at her and we always took her. It was like having a baby as we never got a complete night’s rest, but we did not complain or blame Chessie. When she would make a mess in the house I cleaned it up and did not complain because I knew this day would come sooner than I would want. I knew that Chessie could not help it. This was the least that I could do for her after she did so much for me and the community. She was the most loyal police officer and friend I will ever know and I will miss her terribly. I have been asked to return to handling a police dog (I gave that up when Chessie retired). That is something I don’t think I will ever do again in my career. It would be impossible for me to find a partner as good as Chessie and I could never bond with another police dog like I did with her. 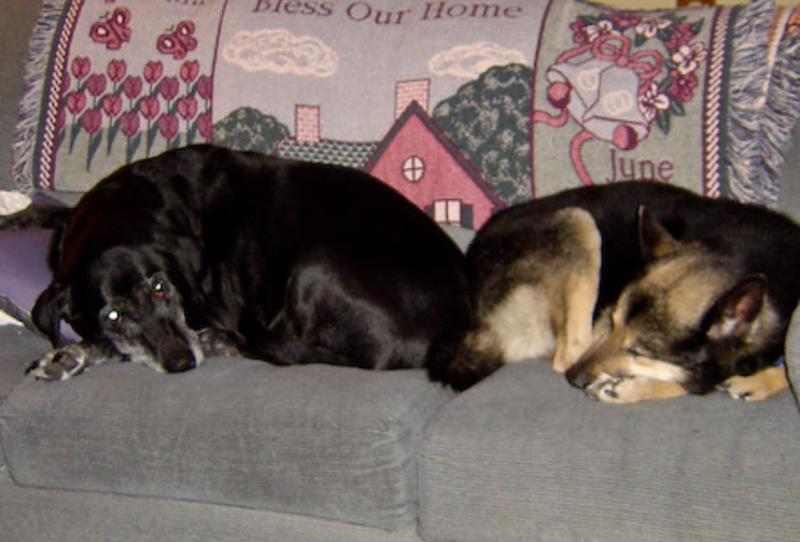