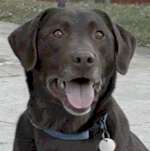 Hershey came into LRR at the age of 6 years when his owners could no longer pay the fines they had accumulated for his ill treatment and released Hersh to the local Animal Control. Not only was Hershey older, but he had been chained to his outdoor washing machine doghouse for his entire life. He had not been socialized or taught even the most basic house manners. Such a dog at any age is often hard to reshape into a socialized house pet, let alone one at 6 years! LRR thought long and hard about whether to take him, since dogs over 5 are much harder to place even when they come from good homes. With limited foster home space and an oversupply of labs needing rescuing, it was a hard decision indeed. But, one we are thankful we made as his story will prove. If you are shying away from adopting an older pet because you think they are “too set in their ways”, or “incapable of bonding to a new family”, or “too old to be taught anything–especially house manners and obedience”, PLEASE read Hershey’s owner’s account of life with an older adopted lab. Dogs over 5 can often be the most patient with children and the most relaxing after a stressful day. And, as you will see from Hershey’s story, they are certainly not too old to learn new tricks!

Hershey, beloved chocolate 7+ yr. old soul-dog of mine, formerly known on the Internet as the “washing machine dog”, has been spending his retirement, or perhaps it is his never-had puppyhood, accumulating names, letters and working toward titles. All with joy and dedication.

He is very proud of being proclaimed an official purebred, Labrador Retriever by the AKC, where he has the ILP name of Hershey’s Sweet Escape. He easily passed his Canine Good Citizen test. Imagine, this undersocialized dog, this abused, neglected dog, did not lose one point during his CGC test. He just wanted to please so much that he was perfect. He also passed his temperament testing and is certified by Pets and People - Companions in Therapy and Service as a therapy dog. It was all just fun to him.

Hersh is currently in sub-novice obedience training where he is working diligently towards obtaining his CD - Companion Dog. He loves going to class and he loves learning. He loves the attention, the treats, but best of all hearing what a great guy he is. Understand, while I have had dogs all my life, I have never trained a dog to do much of anything, and I had never heard about obedience training until Susan mentioned it to me in passing. So, in a sense, LRR and Hersh are the leaders in this endeavor. And Hersh just adores it all.

He is wonderful at heeling, staring straight into my face while he prances around the ring glued to my left kneecap. On the recall, he races as fast as he can right to the front of me and sits, staring at me with that happy tail going a mile a minute. We have had only one struggle; it took him two months to learn to stand on command. I discovered he hated the word “stand” - so we went to clicker training and a different word. He finally mastered it by my doing it in two steps, step one to touch my hand with his nose and step two to get UP! Finally we have done it!

He had his first practice run, and he earned 172 out of 200 points. Enough to pass! We plan to go into the ring officially late fall. We hope to have his CD by the spring of ‘99.

While doing the exercises for AKC obedience, we also do funny things, like “kissing” on command, “speaking” on command and playing dead when I go “bang, bang” with my imaginary gun finger! In addition to all that, and I know you will find this amusing, I am teaching Hershey to swim. Yup. Swim. I guess all those years of rain while he was attached to the washing machine, didn’t give him any great love of water, or any experience in using his natural abilities. So last summer Hershey refused to go in the water at all, instead he would run away. This year, I have worked with him, slowly but steadily. First a step into the water, then two steps, then I would hold him and gently pull him into the water. At first he just thrashed and thrashed and tried to climb out the sides of the pool. Now he will walk to the second step, reach out his paw for me to pull him out into the water and, as long as I walk along side of him, he will gracefully, using his God-given otter tail as a rudder, swim back and forth. Hopefully, by the end of the summer, he will be an ordinary Labrador swimmer!!! But realize it took him many months, lots of hard work and death defying moments, to get him to be that way!!!

So, all in all, we have loved working together, whether it is in straight obedience, or stupid dog tricks or just being a Labrador and swimming around. And I do believe that the skills he and I have learned together during obedience training have taken a really nice dog and made him into a really great dog, while giving us special times together doing lots of different things that Hershey considers just plain fun.

UPDATE ON HERSH’S QUEST FOR HIS CD: On February 7, 1999 at the Burlington Dog Show in Atlantic City, NJ, Hersh got his third leg with a score of 187 1/2 and was awarded the title of Companion Dog!! He was the high scoring labrador in Novice and was the high scoring oldest dog as well. He was perfect for him. As you know his severe hip dysplasia prevents him from sitting straight and from standing on command in a perfect upright position. Those are the only things he lost points on, otherwise he did it all EXACTLY as he was supposed to. And he knew what a good boy he was, I don’t know which of us was jumping around with joy more, him or me. As his reward we bought a bunch of new toys including a brand new kong and a big juicy T-bone when he got home. He was so excited that when we bought a new doggy pad for his crate, he proudly carried it himself all the way to the car!!!! YES!!!!!!!!