Life With A Blind Dog

I had no intentions of getting a third dog. I had no fence. The neighbors were already crossing the street when they saw me coming with my two, shall we say, generously sized labbies. My friends had told me when I began fostering that they absolutely could only dogsit two dogs. So, when I told them that I was adopting a third dog, they were sure that I was certifiable. They were positive when I told them he was blind. 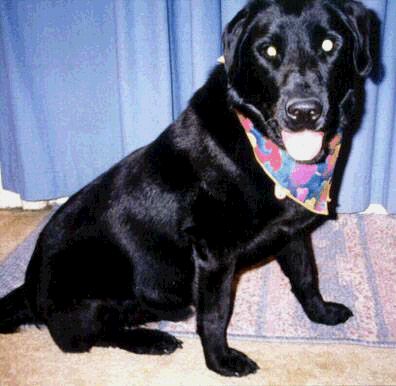 I knew that I would someday adopt a special needs dog, but I had planned that in the distant future. Then Susan called. (You LRR volunteers all know what that’s like.) There was a black (my personal favorite) male labby who was blind at the P.G. County Shelter. He had been picked up by Animal Control in the middle of an intersection. The cars had stopped around him - the occupants realizing that there was something wrong with this animal. He was hunched with his front legs outstretched, and his head buried between his paws, alone and frightened.

He was emaciated and frantically bumping into the walls of kennel when I first saw him. I took him out into the yard but he was disoriented and afraid. I knew I wasn’t seeing his real personality but there was a special sweetness about him. Then he tested positive for heartworms. Now, I was afraid. Afraid to give my heart to a little guy that might not live. I had no firsthand experience with heartworms. I named him Keller (after Helen). Once you name something, he belongs to you. He was mine. Thus, our journey began.

While he was at the vet being neutered, I began to do research. Information about heartworms was readily available. There was even a new treatment. But there was nothing, not one book, about canine blindness. With plenty of info on training deaf dogs, I came to the conclusion that blind dogs must be routinely euthanized. Then a ray of hope. Mary sent me a blind dog web page address and on that page was the first information I found along with an e-mail address to subscribe to a blind dog list.

My first instinct was to run around the house and move all breakables up about 6’. I also thought padding everything with edges was a good idea: the coffee table, chairs, the sides of doors. You can just imagine what my house looked like. Then, I decided that I needed a retractable lead that could be anchored to the house so the little guy could feel the tension and find his way back to the door. How was my jealous male lab/ pointer mix going to handle a recently neutered male? Should I crate Keller? Would that make him feel safe or would it be too difficult for him to enter and exit? I decided to make a den for him by pushing the small kitchen table into the corner, putting a fleece bed under it, rehoming the chairs and gating the kitchen. I had a lot of questions and worries and not a lot of answers.

I was so excited picking him up from the vet. When I brought him into the house, Lightning immediately pinned him. Integration into the pack would not be easy, but I had the wisdom of the Rescue and the “this is what I tried” knowledge from the blinddogs e-mail list. Steps were the most difficult. I put a drop of perfume in the center of each one and said “Step 1, Step2…”, until he learned how many there were. I needed to remember to always put chairs away, never rearrange the furniture and not leave anything that I wanted to remain unchewed on the floor. Which in my case meant an entire change in lifestyle. Keller learned the word “careful” quickly. I unpadded everything. He needed to bump into things to learn. I am very protective and didn’t enjoy this “necessary evil”.

What I began to discover was that Keller was a pretty amazing boy and thankfully submissive. It took less than 24 hours for him to learn the layout of the first floor. He sensed objects in front of him by smell and walked around them unless he got excited. He raised his feet and put them down gently to feel out the terrain. He fell off a few curbs and took one belly ride down the stairs, but he was catching on quickly.

The first time I walked Thunder and Lightning, I left him within my sight tethered in the yard. As we neared the house, his tail wagged frantically. He knew our scent in less than 24 hours. For Keller’s first few walks, I threaded a 4’ leash through plastic PVC pipe to help control and guide him. Soon the street sounds didn’t frighten him anymore, and he now uses the flexi-lead like his “brother and sister”.

He was having difficulty telling the difference between carpet and grass. He had been an outside dog and was blowing his coat. Thankfully the smell of the Tresor offset some of the inherent problem odors. I did the normal house breaking stuff, except that I tied a bell to the door, and rang it every time I took him out. I felt like someone seeing their child take his first steps, the first time he rang the bell to tell me he needed to go out.

Keller’s heartworm treatment was a trial. He didn’t do well with it at first. He had constant diarrhea and vomiting. His temperature spiked several times, and we went back and forth to the vet. Thunder had cruciate ligament surgery at the same time. It was a storm, but we weathered it. I was wishing I owned stock in Simple Solution.

Keller rolls in every smelly thing he can find. He revels in it with total abandonment and joy. He does this to disguise his scent from potential predators. Keller will only bark when the others bark, so as not to give away his position. Blind dogs are also deaf/mute to other dogs since most pack ranking is done through body posturing and behavior - things a blind dog would never see to learn. So when Lightning was “telling” him his position in the pack, Keller didn’t know how to answer that being the omega was OK with him. Lightning did a lot of what I call “drive-bys”, where he lunged at Keller as he went by. And, Lightning peed on his head a few times as if to say “This is what I think of you, Bud.” As the months have passed, Lightning has become more tolerant. I began by protecting Keller and correcting Lightning, which was confusing the pack order. So, I switched tactics. I started praising Lightning every time he let Keller do something I knew annoyed him. I knew we had finally reached pack integration when I cleaned Keller’s ears, and he let out a yelp that summoned Thunder and Lightning to his defense.

Somehow, Keller knows the difference between my leather planner and his leather toys. It is truly amazing, and a very good thing since he relishes shredding all the plush and plastic he can find. Frisbees are a special favorite.

If he gets confused, I take him to his water bowl which seems to be the center of his universe, and the way he orients himself. He gets very upset when it is empty. I found him one day with one paw and his head lying in the water bowl crying. My interpretation was “Mom, how could you have allowed this most heinous crime to have occurred?”

He loves people, especially children. It is the one time he really strains at the leash. He is so gentle. He approached a baby in a stroller, nuzzled at her and delighted in her laughter.

When the Rescue took him in from the shelter, Keller had heartworms, whipworms, kennel cough, ticks, ear infection, and was emaciated and unneutered. Frostbite had eaten away part of his ears, which were crusty around the edges. And, of course, he was blind from PRA. His coat was brittle and stood straight up. Today, Keller is a happy, healthy little guy who loves snuggles, squeaky balls and walkies. His heartworm test came back negative, and the vet put him on a diet to lose weight. My friends argue over who gets to watch him when I travel. What I find most interesting is that when I tell people he is blind they insist that he must be able to “at least see shadows”. I tell them he has no retinas and that he will never see, but it’s okay. He doesn’t know he’s blind.

For further reading, I recommend Living with Blind Dogs by Caroline Levin, R.N. This is the only resource book on canine blindness, but fortunately it is excellent.