On March 4 1992, Whippie was born into a litter of 9 black labs. His Mother was a first time Mom, an oversized black Lab. His Dad was also a first time father, a chocolate with beautiful amber eyes. When the pups were a week old my husband, 10 year old son and l went to see them. It was hard to make the choice, but we settled on a very large female. I tried to talk my husband into taking 2 pups but he, having grown up dog-deprived, was unsure of this. So we settled on the female: a beautiful, big black girl. Her name is Dakota Lee. 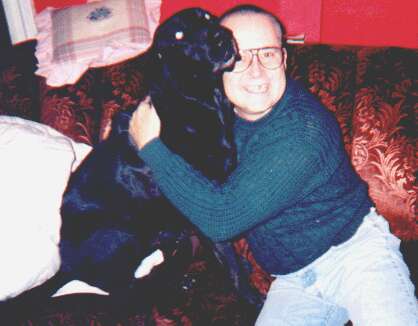 Whippie’s life didn’t start out very well from the first. At 3 weeks old, the pups were transferred from a small bedroom to an enclosed room off the back of the kitchen. The stairs to the basement of the house were located in this room and had been, the breeder thought, puppy-proofed. At 3 weeks old, Whippie somehow squeezed himself between the fencing and the banisters and took a fall down a flight of stairs, landing belly first on a cement floor. After being x-rayed and examined by the vet, the breeder kept a very close eye on him for the next 4 weeks. Surely the angels were with that wee guy, as he didn’t have one problem. Whippie was chosen by a man who wanted a lab and said he had a great wife and 2 great kids who would love the dog.

Being a small town, the breeder was able to keep an eye on where he went. When the man took “Midnight” home to his big, beautiful, new home, the wife was horrified with this unwanted surprise. He spent his first 3 months living in the garage, allowed only into the kitchen to eat. At the age of 3 months, he was cast out into a pen at the very back of their large yard, where he was ignored, teased and tormented by the man’s children. The breeder saw this unfolding and contacted the man several times. She threatened, begged, offered to buy the dog back, but the owner felt that since he had paid for him, he could do as he pleased.

Christmas of 1993 rolled around, and the breeder ran into the man’s wife at our local grocery store. When she asked her how “Midnight” was the woman said, “The stupid dog got out of his pen and ran away 3 weeks ago.” The breeder asked her if she had called the SPCA, and the reply was “NO, l don’t care where he is, and l don’t want him back.” The breeder stopped at the shelter on her way home, but they hadn’t picked him up at that point. On New Year’s Day, she learned that “Midnight” might be at the SPCA. A look in the window confirmed that it might be him. She called me that night, and we started networking to form what became the “Save the Whipple” (a name she had called this pup when she had him) campaign. I went up to the shelter on Jan. 3rd to have a look at this poor guy and fell immediately in love.

In the pen he was ferocious, barking up a storm, hair standing on end. Once out of the cage, he wiggled and wagged his tail until l thought it would fall off. I came home and went to work on my husband about him. By the way, not only did we have Whippie’s sister Dakota, but had 6 months earlier taken in a 5 week old Lab/border collie on her way with the rest of her litter of 14 to the pound. It didn’t take too much to convince Kit that we get him. So on Jan. 4, 1994 we brought home the Whippie. He was only 50 pounds, had never been vetted after his first shot, was unneutered and not housebroken. His unaltered state caused some problems right from the start, as the wee girl was on the verge of being spayed. However, the 2 of them went to the vet’s on the same day, and all was well in that department. Having never been indoors until he was 18 months old, he did do some marking initially, but with the girls to teach him the ropes he soon caught on. As for his weight, on his last trip to the vet for his heartworm check, he tipped the scales at 95 pounds. Not bad for a dog who survived on God knows what while he ran loose for about 3 weeks during a very cold winter. Whippie still carries some emotional baggage from his last life, in that on outings he can become very frantic upon greeting others, but we’re working on that one step at a time. The journey of a thousand miles begins with one step. The joy, laughter and unconditional love we get from Whippie will always outweigh the negatives.

So that’s the Whippie’s rags to riches story. As you can see from his picture, he’s one happy boy now days. Whippie’s is a success story l never tire of telling. I hope this story will be read by many and convince them to take the same chance in adoption that we did.

Update 2000: We are sorry to say that Whippie has passed over the Rainbow Bridge because of cancer. Please keep his family in your thoughts and prayers during this difficult time.