Coming up on the one-year anniversary (January, 1998) of adopting Max and Sarah, we thought it about time to share some of the stories about these two pals and to let everyone know how they are getting along. The first few months were tough with two very energetic “teen” dogs. After losing several pairs of shoes, 12 feet of linoleum flooring, 2-3 foot sections of drywall (escape attempts), and several bicycle parts, we finally have them calmed down. Shoes are only taken and hidden (not chewed!) when we want to leave the house, drywall is not an appetizer anymore and bicycles are no longer part of their 30 or so toys. It seems that our house has become their house and they finally realize it…..THANK GOD! 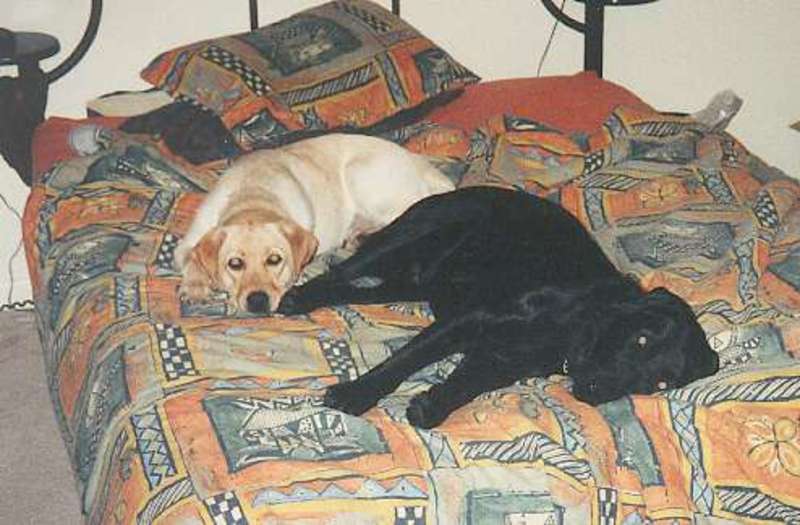 Both Max and Sarah have become pure water dogs. At the Occoquan river where we frequently walk them, they have a great time jumping off the Prince William County crew docks and chasing the ducks and geese swimming there. Sarah, the Olympic leaper, will run and jump 10 feet off the dock to retrieve a stick, ball, whatever. Max prefers to slide into the water like an otter and just paddle around for the simple enjoyment of it. Sarah’s favorite game is to wait until Max is swimming near the dock and then to jump as high as possible and bomb him… a look of pure pleasure on her face as Max looks up in terror realizing he is in big dog doo doo. It took awhile for both dogs to get accustomed to swimming in deep water. A plastic baby pool in the back yard began their training and they began to play in and out of the pool, finally laying down almost submerged in the water on very hot days. From this, we went to the boat launch at Occoquan where they could wade in up to their shoulders. Finally, to the deep water… and we can’t get them out half the time.

Both Max and Sarah traveled to Martha’s childhood home in Ann Arbor, Michigan this past summer in a rented mini-van. Removing the two seats provided them with about 8 feet of space to enjoy the 9 hour ride in comfort. But they had different ideas about comfort. They both proceeded to cram themselves up in the drivers compartment the entire trip. Sarah balled up and went to sleep under Martha’s feet, and Max slept between the two captain’s chairs the entire trip. The only person that used the back space of the van was Casey to take a nap. Both enjoyed the trip very much and were perfect travel dogs.

Their most recent adventure was an introduction to Martha’s three month old nephew. We don’t believe that either dog had ever been around newborns. At first we were a bit concerned that their roughhouse nature would inadvertently end up with a claw scratch or something worse. Both Max and Sarah were a bit confused at first around this small blob that emitted a deafening scream before each feeding time. After the first several hours of sniffing and licking the baby and his clothes, both dogs became very concerned and visually upset when the new “blob” would sound the eating alarm. They would actually begin to whimper and moan to us that there was a problem and we should do something about it… FAST. Sarah especially seemed to understand the problem, either telling us: “to shut that kid up he’s annoying” or “hey, help this thing out its hungry!” Knowing Sarah’s strong maternal instincts, we think it was probably the latter message.

Sarah has become a mini-celebrity in the world of million dollar advertising. It seems that her uncle, an advertising mogul in New York City, used her likeness and personality as the main character in a story pitch to help retain a multi-million dollar dog food account for Life Magazine. The ploy worked and she is now known in certain circles as “Sarah the Life Dog”. She has not yet begun to bark “Show me the Money,” so we feel fortunate that stardom has not gone to her head.

Max is content being the “Captain of the Guard” of our neighborhood. Squirrels, rabbits, deer, and other dogs watch for Max and his antics of identification and friend or foe behavior (most moving creatures being foes). We have noticed that Max has diminished eyesight at night seeing only shapes or movement rather than objects or people (Lee Gouthro Max’s foster mom warned us of this), so we keep him on a tight leash for our evening walks because he challenges almost any movement. He has even approached the television set on several occasions to examine the dog on the screen. In a recent X-Files episode involving a pack of wild dogs, Max was near frothing at the mouth he was so excited. Max has evolved into one of the greatest cuddle dogs ever. Whenever we are in the house reading or watching the television or working at our desks, Max is usually right there with his head propped on our feet fast asleep. He usually naps on our bed with his head on the pillow and once in awhile under the covers with his nose sticking out for fresh air. We continually find him on the bed in the morning curled up next to one of us (long ago he learned how to get up on the bed without waking either Martha or me… a nice trick for an 76 pound dog), and we are always awakened in the morning by a gentle ear lick or hot breath blown on us as a notice that breakfast and a trip outside is needed or else! Or else is usually an indiscriminate stepping pattern that always finds the most tender of human areas…thus we get the hint the first time.

Both Max and Sarah have retained all of their original sweetness and energy that were trademarks of their personalities before Martha and I adopted them. Max is still airborne much of the day, seeming to lose his mind at the prospect of a walk, going outside to play ball, or dinner (the latter a word that is not even uttered in this household lest it create pandemonium). Sarah is just as sneaky and smart, as we were told, but so cute that you just can’t be mad at her. And they are inseparable. When one is hurt or on medication, the other is always there to lick the wound or infected ear or torn foot pad (Max has suffered the latter more than once in an enthusiastic dive/slide for a thrown ball). Each morning they greet each other with a round of sloppy wet kisses and a stretch and they always flop on each other for a nice nap in the sun on our deck. A nice life indeed.

We continue to wonder what type of people would give these two up in the first place, but are very happy for our sake that they did. We have discussed the possibility of adding a third labby to our household but realize that means buying a king size bed for the five of us… the jury is still out. Max and Sarah cannot wait for the next Lab Rescue Reunion, they had so much fun at the one last in May when they made so many new pals and slept the entire way home in the car. Sarah has suggested that we do it more than once a year… I told her we would look into it.