It’s been awhile since we’ve written so we thought that we’d give you an update on Keebler. Last month we celebrated our fourth anniversary with Keebler. We spent the morning of July 4th with our traditional 4th of July early morning walk through the woods. Now that Keebler is getting older, we don’t go as far as we used to but the big guy still enjoys getting out. Every Sunday, we drive to a park in Virginia Beach near the North Carolina border and walk along the Northwest River. Keebler loves it there.

A few months ago we noticed a small growth on the back of Keebler’s left hind leg and brought it to the attention of out vet. She thought that it was best to remove it as soon as possible since it was in an area where a dog doesn’t have a lot of excess skin to stitch back together. Keebler had his surgery a few weeks ago and the pathology test on the growth showed that it was benign. What a relief!!! Unfortunately, Keebler couldn’t resist chewing off his bandage and tearing out the stitches. He now has to wear a hooded collar when he is alone and goes to the vet every three days to get his bandage changed. The vet said that he’ll be fine and back to normal shortly.

Keebler is truly worthy of being in the Loyal Order of Labs. He follows me everywhere. When it’s time for bed, he’s right behind me. When I’m in the bathroom getting ready for work in the morning, he lays right outside the bathroom door. And when I sit in the recliner at night, Keebler is right next to me waiting for his rubs.

Keebler and I are a lot alike in that we’re both getting older and grayer. Last year I reached the age where I can retire from my job with the federal government. After a lot of thinking, I think that I’ll be retiring in January or February so I can spend some time with Keebs and take long rides together. I think that he’d really like that and I know that I will.

I’ve attached a few pictures of Keebler in the backyard. You can see that he’s a little grayer, has a bandaged leg, but he still has that great labbie grin! 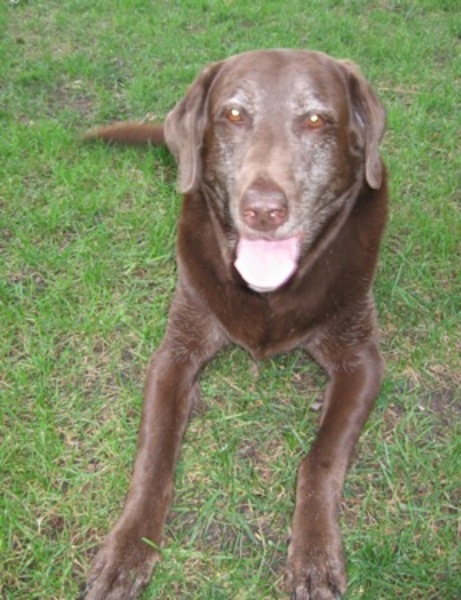 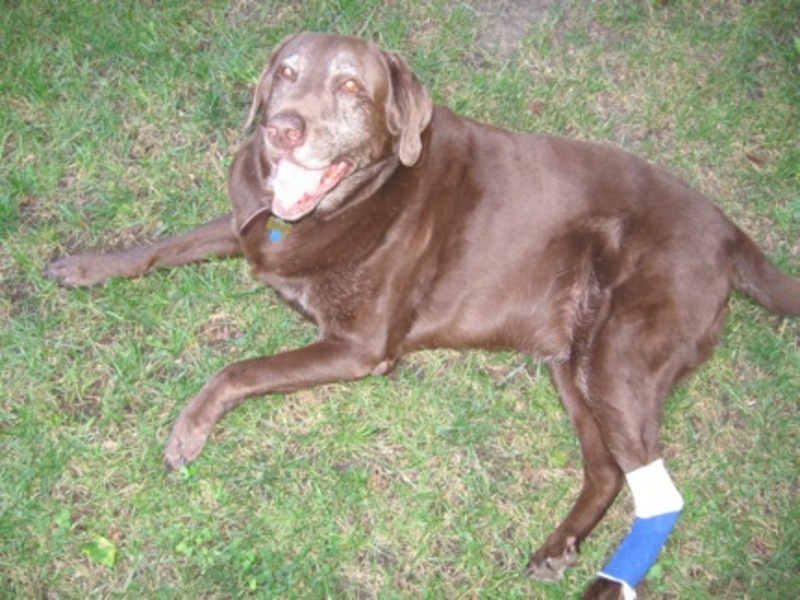 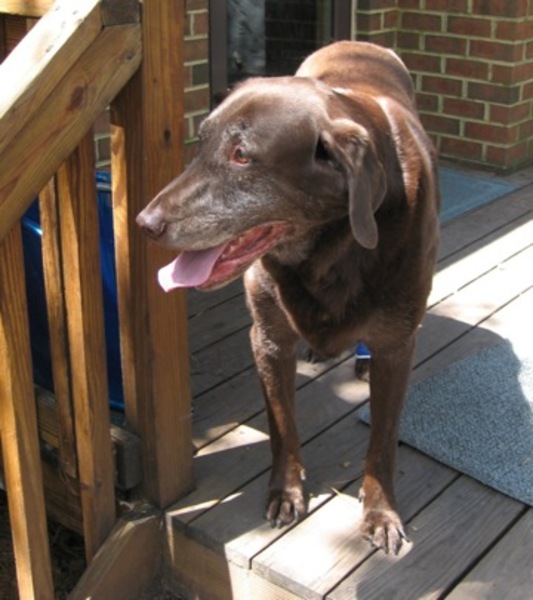 We wanted to thank you for sending Keebler the gift of the Quiet Spot pouch with our recent order. We’ll be celebrating Keebler’s tenth birthday on Tuesday and we’ll give him the pouch and his new lighted collar cover then!

Keebler is doing great. Since there was a few times during the year that he limped a little, the vet put him on meds which seems to have helped a lot.

Since it’s turned a little colder outside, Keebler and I have started taking longer walks, which he loves. The colder that it is, the more goods things that there are to sniff. We still take our early walks in the morning, another walk when we get home from work, and then we go for a longer walk after supper. Since it’s been getting dark earlier, Keebler wears his pet blinker which makes him blink like a Christmas tree. Keebler still barks whenever he sees someone walk past the house but he is really well behaved on our walks. Even if another dog is barking at him, Keebler just minds his own buisness and goes merrily on his way.

Keebler loves his rides in the car and always bring his rawhide chew toy with him. We try to take him for a long ride every weekend and he’ll either take a nap or look out the back window. He’s a little grayer but he still is as active as when we adopted him three years ago. He’s a great dog and wonderful companion. We’ll be sure to spoil him with some special treats on his tenth birthday. 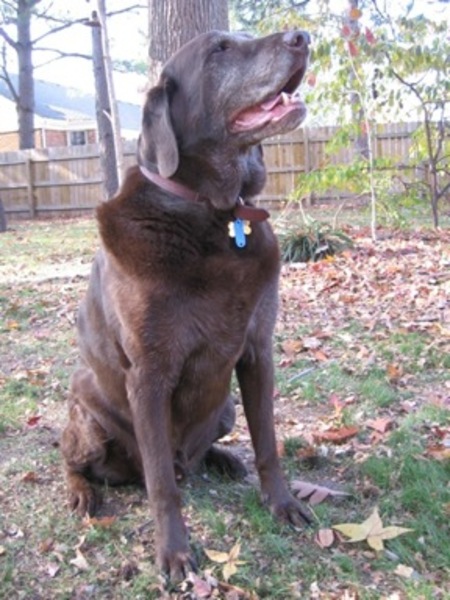 Five months have passed since Keebler came to live with us and he has become a regular member of our family. He is so excited when we come home from work and he always greets us with many wags of his tail. Whenever someone arrives at the house, he immediately grabs his raw hide bone and carries it throughout the house to play keep away.

Keebler loves to go for walks and gets so excited when he sees us getting ready to go outside. As soon as we pick up his collar and leash, he dances around the room in a circle that we have named ‘The Keebler Dance’. He still loves to go for long rides in the car and his eyes gleam with excitement every time he sees us pick up the car keys.

So far, we have taught Keebler how to shake hands and roll over. He learns so quickly and his favorite reward for a job well done is a roasted pig ear or dog biscuit.

Keebler always follows us wherever we go in the house. If we are walking down the hall and he is ahead of us, he will always turn around to make sure that we are following him and haven’t taken a detour. He is so long that he almost bends in half to look back and make sure that he hasn’t lost us somewhere along the way.

Every night after our walk, Keebler lies down with us to watch TV and get his daily share of rubs. He will roll on his back or swat us with his paw to remind us that he wants more. When its bedtime, Keebler will always follow us to the bedroom and curl up in his bed. If the bedroom door is just the slightest bit closed, he will stand outside the door patiently, peer in, and wait to be told that he can come in. One of Keebler’s funniest habits is his snoring. There have been many nights that he snored so loud as to wake us all up.

We celebrated Keebler’s seventh birthday (a birthday we share in common) on Saturday and he really loved his cake and ice cream. We also took him to the Outer Banks of North Carolina where he loved exploring the beach.

Keebler is such a wonderful dog and companion. We love him more and more every day. 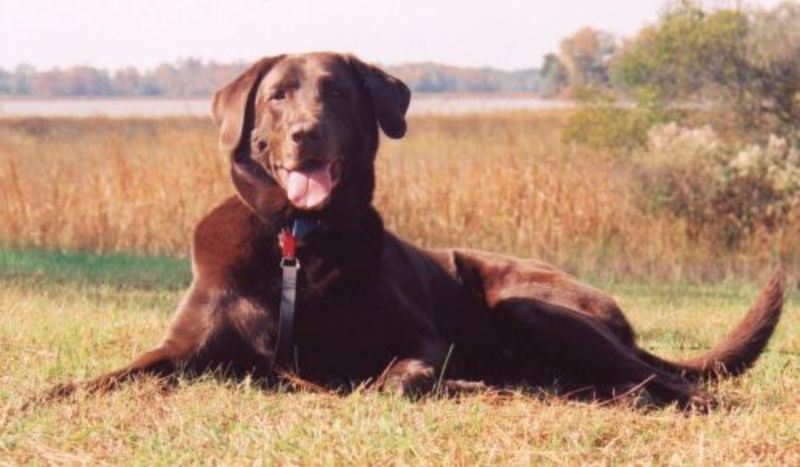 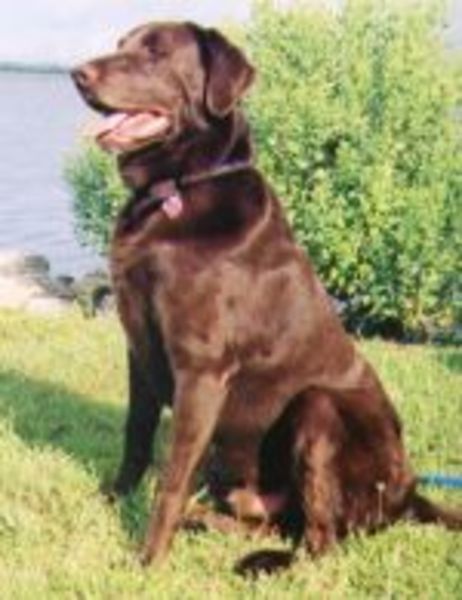 Keebler came to LRR in 1998 at 3 months old as part of the “Buddy Backlash” when suddenly everyone wanted chocolate labs like President Clinton’s. Even though Keebler’s folks had paid big bucks for him, they only kept him 3 weeks, and then abandoned him at the shelter with instructions to “Go ahead and kill him” because they were going on vacation and had no place for him. LRR placed Keebler in what we thought would be his forever-home, but after a few years, his family had children and decided they couldn’t care for him any longer, so he came back to LRR. Keebler charmed his way through several foster homes, until his true forever-home was found. As you can see below, Keebler is in dog paradise and his parents are crazy about him!

It’s been a month since we adopted Keebler (or since he adopted us) and we wanted to tell you what a joy he is.

Keebler befriends everyone that he meets. Everyone in our family and neighborhood has fallen in love with him and we all learned to watch out for his tail which never stops wagging. It took a few weeks, but our two cats, Midnight and Miss Kitty, also have become Keebler’s friends. We just have to work a bit on Keebler’s occasional snacking on the cat’s food.

Keebler loves to go for walks and is fascinated by everything that he sees, especially the rabbits and frogs. After his early morning walks, he loves to jump in the bed with us to catch a few more minutes of sleep. Of course, he loves to have his tummy rubbed and promptly rolls on his back if you stop rubbing too soon.

We love to play hide-and-go-seek with Keebler. We’ll hide in a room and call him. If he walks into the room and can’t find us, he will stand there and bark until we come out from hiding.

Like most of us, Keebler can’t wait until the weekend arrives. He loves to go for rides in the car and is a wonderful companion for our one day trips around the state. Keebler loves to snooze in the back seat and always rests his head against the arm rest of the door. We soon learned to pack him a pillow so he will be more comfortable. We look forward to taking him to the beach in the fall and let him frolic in the surf.

We want to thank everyone at LRR for the wonderful work that you perform and for allowing us to adopt Keebler. Everyone was so kind to us and all the dogs that we visited were so loveable.

We love Keebler dearly and thank you for the wonderful addition to our family. Keebler is a real gem! 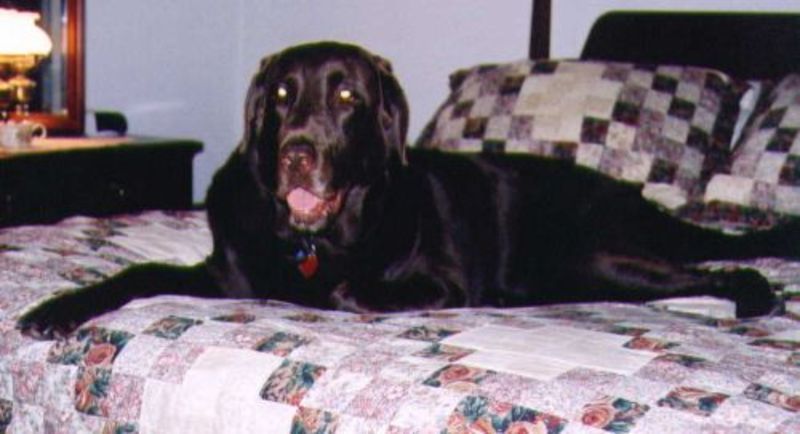 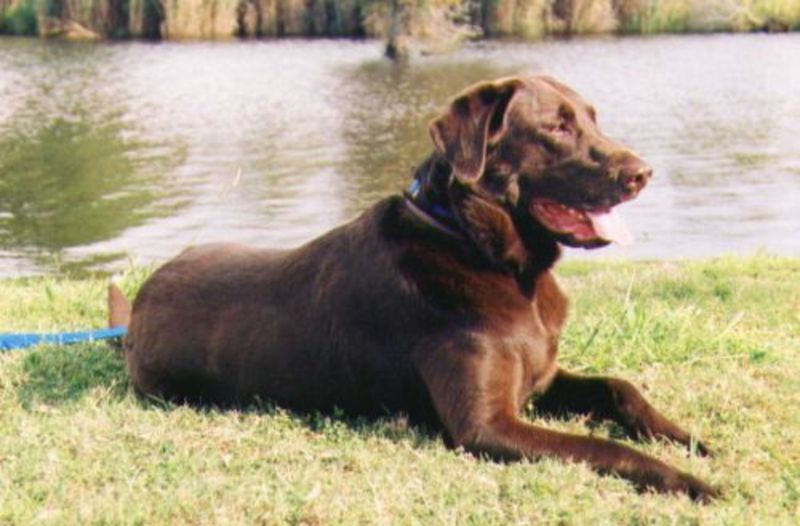