Frankie came to LRR when he was just six months old. He and his littermates had been in a shelter for several months. In the shelter he was only fed once a day, and not enough food for a growing puppy, so he had a voracious appetite and was underweight. After feeding him his regular ration three times a day instead of one, he started to put on some weight and slow down his eating. As a very cute and cuddly dog, it wasn’t hard to find a new permanent home for him. This follow-up from his new family says it all:

Eight more days and it will be two months ago that Frankie came into my life. I thought I would send you an update…

Frankie just gets more and more handsome with each passing day. He is the best looking, best behaved, and sweetest dog (that is an objective opinion-everyone agrees with me!) in the entire doggy park. He still is very, very sweet. We finished our obedience school; Frankie was the smartest in the class. We went to NYC so Frankie could meet his grandmother, grandfather, uncles, aunts, and cousins. They all loved him… what is there not to love?! We went walking in Central Park.

We also did some camping in West Virginia… Frankie liked that a lot. He shared my sleeping bag and went swimming several times a day.

Frankie eats only from my hand. I even have to hold his raw hide bones while he chews on them!! He sure is training me to be just the type of mom he wants; which is great with me, because that is what I want to be. I wish I could even spoil him more, because he deserves it. He is like a little innocent angel.

Frankie has a girlfriend - Sundaye - who lives down the block. She is an older woman (three years old)… they play together in the yards every day. She recently had 10 puppies. You should see Frankie with them - He is so gentle. One little puppy - Flo - follows him all around and he licks her! He looks like the proud dad, but of course he isn’t.

We have an appointment in September with an artist to have an oil portrait done of us, so I can hang it in the living room. That is my birthday present to myself.

Frankie is amazing. He is so cute and so good. I love him with my whole heart and soul. I cannot imagine my life without him. He is very happy and so am I. I can’t thank you enough. 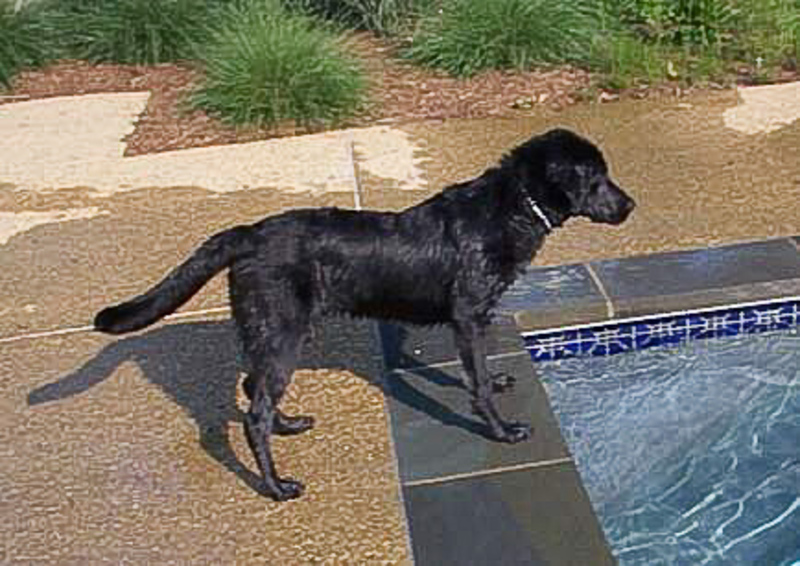