Hi to all my friends at LRR! It’s been a while since I’ve checked in, so I thought I would let you know how I’m doing.

Last month (March 2006), I celebrated my 5 year anniversary with my forever family. Life’s been good! If you remember, the first few years I was in my new home, I had a “brother” who also came from LRR - a yellow lab named Tucker. When Tucker crossed over the Rainbow Bridge in October 2003, I have to admit that I was a bit lonely, and just waited every day for Mom and Dad to come home from work. But that all changed in April 2004, when my Mom became a stay-at-home mom with a new son (of the “people” variety!). I love being with my people, and this was the best - now there is always someone home to pet me and give me treats! My Mom says that I’m the best “big brother dog” that she’s ever seen, because I’ve done great with my new “two-legged” brother.

Until recently, I was an active therapy dog for Fidos For Freedom, Inc, visiting nursing homes and hospitals. My Mom took a break from our therapy dog work for the time being so that she could spend more time with her active toddler. But I still make sure that I provide therapy - not only to my family, but to all my neighbors too! My Mom calls me the “hand magnet” because anyone who is around me just has a tendency to always start petting me! And of course, if I want anyone to pet me, I just go over and sit on their feet!

I keep active by patroling my big backyard (I just have to get rid of those squirrels!) and taking daily walks. When the weather is cool enough, I even go jogging with my Mom. My vet says I am in great shape!

So, life has been good to me. Thanks again, LRR, for finding me my forever family! 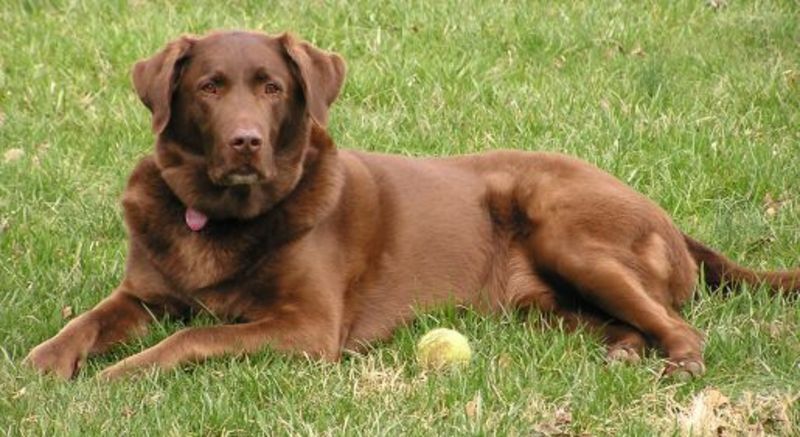 Sorry that I hadn’t written sooner. I was supposed to let you know how Wilbur’s surgery went a few weeks back. As it turns out, the surgery went fine. While we had him under, we removed the lump from his belly, got his nails trimmed, had that spot on his eye removed (it was a cyst and was slowly getting larger), and had a dental. I call it a tune-up! It turns out that the lump on his belly WAS a mast cell tumor. Here we go again. I thought I would only have one lumpy dog, and that would be Tucker. Luckily, my vet thought there was a possibility that it might be a mast cell tumor, so she took very wide margins, which proved a rather wise decision. She got everything so we only have to monitor the situation and not do another surgery for the margins.

Speaking of Wilbur, can you believe that today (3/3/03) is our 2 YEAR anniversary of adopting him! I can’t believe that two years has gone by. He is just funny “Chunker” (our nickname for him), and we know he loves it here because is constantly giving us belly and doing the “Chocolate Lab snap” at us. We just love him more every day. I feel bad for him because with the horrible weather, we haven’t been able to walk and run him as much as we would like. But we are finally starting to get back out there as the snow continues to melt and we have a bit more room on the street to walk. He is also doing well with his therapy dog visits. It’s funny, EVERY time I go with him to visit, at least one person tells me what a beautiful dog he is. (Tucker had a similar thing, but every time I went somewhere with him, at least one person would always say what a sweet dog he was. Boy, did he have them fooled!)

Tucker, true to form, is still hanging in there. He has his good days, and his not so good days. The back legs continue to gradually weaken. All this snow certainly has not helped him. My neighbors must think that we are nuts because every snowstorm Kevin and I are out in the backyard shoveling an elaborate path for his “latrine”. He’s learned to stay on the “beaten path”, but on occasion he wipes out if it’s icy or if he tries to venture off the path to follow where Wilbur has gone. At that point I have to “rescue” him, because he is usually flat on his belly or on his back legs and can’t get up. (“I’ve fallen and I can’t get up”) I don’t even think it stresses him much any more because he doesn’t pant or anything like he used to, he just waits for me to come and help him up and then he’s on his merry way. Unbelievable. He is also beginning to get much more “vocal”, or “talkative” as you put it. Don’t know why he’s doing that.

That’s about it from here. The boys are doing ok!

So much has happened to me in the past year!

For those of you who don’t remember, I was first available for adoption in February 2001. In March 2001, I was adopted by a family that already had another dog from LRR (Tucker). They were used to having an older dog around the house, but when I showed up, I promptly let them know that younger labs have LOTS of energy. Within 2 hours of being in my new home, I found the one weak spot in their fence (which has since been totally sealed up), and within seconds ran out to meet my new neighbor! They used to think that Tucker ran fast in the yard; well, I ran around so fast that it made him look like he was going backwards! I quickly learned that this big yard was a fun place to be and now I love it!

It was a bit rough for the first month or so because Tucker ALWAYS had to exhibit his dominance. He didn’t realize that I am just a fan loving guy and really had no interest in being the alpha dog. Once he finally realized that, we became buds.

During my first month in my new home, my mom took me to obedience training, and she quickly learned that I was a handful! I must not have been socialized very much around other dogs (at least not on leash), and when I saw the other dogs in class, I went crazy!!!! Mom soon realized that I only want to meet the other dogs, but it’s one of the things that she continually works with me on, because I still get so excited to see any new dog!

Mom also trained with me so that I was able to quickly pass all the tests necessary to be a therapy dog for Fidos For Freedom. Tucker is now a retired therapy dog from Fidos, and I picked up where he left off. I now do 3 therapy dog visits a month! The patients love me, especially when I show them my favorite trick, which is to bow on command!

Mom and Dad quickly realized how playful and fun loving a lab can be. My dad says that they now have a ‘true lab’, because they never saw all the lab tendencies in Tucker since they adopted him at age 9. I love to play with my toys, and to fetch them and bring them back to mom and dad. I also LOVE belly rubs! I have to be close to my people, and I will often go over to them and just lay ON their feet! My dad and l are jogging partners, and it’s really helped my overall health. (During my annual vet checkup, my vet said that I looked great and that I had the heart of an athlete!)

So, as you can see, I have come so far in one year. Thank you SO MUCH for saving my life and giving me the opportunity to live in a good home. 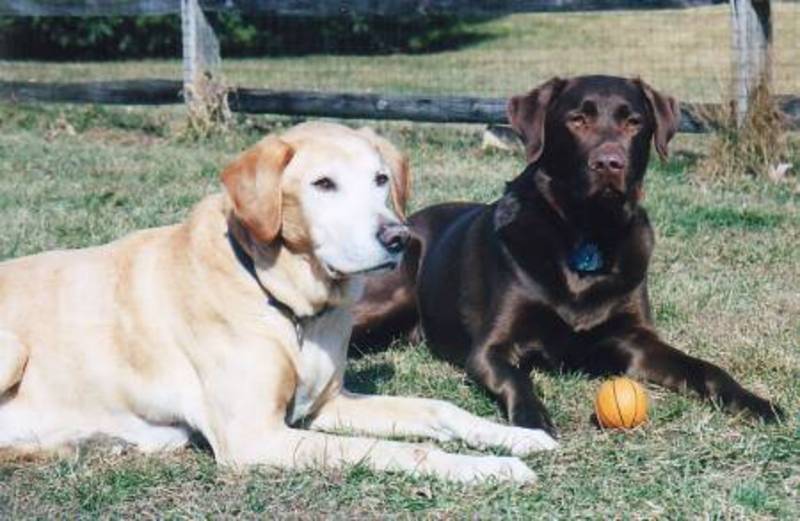 Just thought I would check in and let you know how the boys are doing!

Well, it was 3 years ago today that Tucker went and took his Therapy Dog test at Fidos. I can’t believe it’s been that long! Of course now he is a comfortably retired therapy dog. He is hanging in there, God bless him. I am convinced that he has the degenerative myelopathy, because he has many of the symptoms, and I believe I told you this before, his one doctor says that they see this very frequently with laryngeal paralysis. I can see that his muscles are very gradually deteriorating (on occasion he will just be standing there and his back legs will give out). It’s sad to see the old boy when this happens, but we know that we are doing everything possible to make him comfortable. He completely enjoys his visits to the acupuncturist and his attitude is GREAT. I forgot how pushy a dog he really is, but he reminds us with his constant insistence on having treats! What a good boy.

Wilbur is also doing VERY well! I can’t believe that it will be a year in March since we got him. With each day that we have him, the cuter and funnier he is. As Kevin says, we got a “true” lab with him, whereas with Tucker we got a “retired” lab because we got him so old. Wilbur LOVES to play with his toys, and I just love it when he brings them over so that we can throw them and he fetches them. He will lay on his back and play with a toy in his mouth - it is SO cute. Sometimes he puts what I call the “after burners on” and he REALLY goes FAST running around outside. Like crazy! A few times he tried to engage Tucker in play (or maybe was trying to exhibit some dominance), but Tucker wants nothing to do with it (I think Tucker realizes Wilbur is physically more strong than him), and on a few occasions he’s knocked Tucker over! Wilbur is also doing very well at Fidos. So many people compliment me on how much he’s improved. I still need to work on his heeling because he is a real puller - especially by other dogs, he just wants to get to them, and my shoulder definitely feels it the next day! But he really does GREAT on his stays and just loves all his buddies at Fidos!

Thanks again for letting us provide a good home to our boys. We just love them!