Just wanted to give you an update on Winston. I’ve been meaning to write but just never got around to it. Winston continues to be a delight and the love of our lives. He has brought such joy to our lives since losing our previous 3 chocolate labs.

He continues to be obsessed with playing fetch at least twice a day no matter the weather. I’m sure our neighbors think we have lost our minds when we stand out in the rain and snow playing fetch, but he loves it and can’t get enough of it. He also continues to carry a “baby” (stuffed animal toy) around in his mouth where ever he goes. He meets us at the door with the favorite of the day. Winston loves going to the local dog run where he plays fetch (of course) and meets other dogs. Our friends can’t get over how calm, relaxed and loving he is and how giving he is with his love. His favorite place in on the chaise lounge of our couch or in the middle of our bed sleeping on his back.

Winston turned 6 years old in January. We aren’t sure of the date in January, so we put a calendar on the floor and the first one he stepped on we decided was his birth date. So he chose January 19th as his birthday. He enjoyed frosty paws and dog bones for his birthday.

As you can see by the pictures attached he has put on some weight but the vet says he is in top shape and doing great. Thanks again to LRR for giving us such a wonderful companion in Winston. Our lives have been changed for the better because he is in our home and our lives. 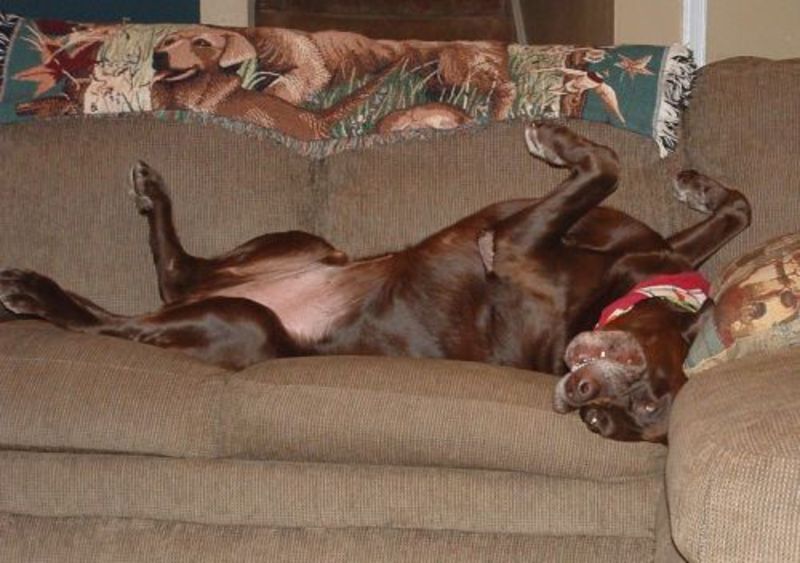 Winston is doing GREAT! He is such a love and a cuddler. He and Fergie are like peas in a pod. She is doing well with him and he with her. She trying to get him to play with her on occasion and I think with time, he just might do it. They are very cute.

He plays ball (fetch) at least 2x a day and sometimes just sits on the deck with Fergie watching the world go by. They chased a baby squirrel together and actually caught it last week, but Jeanne and I were the heros and were able to save the baby from certain doom! Thank God! :)

I’ve registered for the picnic for all of us (except Fergie - don’t think she could physically tolerate it). I haven’t started training Winston officially for the contest but hope to do that this weekend. I don’t think the food game will be any problem and won’t need training! :) That boy LOVES to eat.

We took him to the vet last Friday and he got an physical and passed with flying colors. Our vet thinks he’s wonderful and said we got a great dog in Winston. He even said he would have taken Winston himself. That made us feel really good cause we know Winston’s a doll!

Winston continues to do well. He is so obedient - it’s amazing. He and Fergie are improving their relationship everyday. They’ve only had one tif and of course it was over food - no surprise there. Yesterday, while he was eating his dinner, Fergie was drinking out of the water dish which is attached to the food dish - no problems at all. Last night Fergie had a little alone time with us and when we came back in the house, Winston licked all over her. I think he was concerned about her and it was very cute. As Jeanne was showering this morning, imagine her surprise when one of Winston’s cloth toys was clogging the drain. She didn’t close the bathroom door all the way and he came in, stuck his head in the shower and dropped his toy right in. It was too funny! We couldn’t stop laughing it was such a surprise. 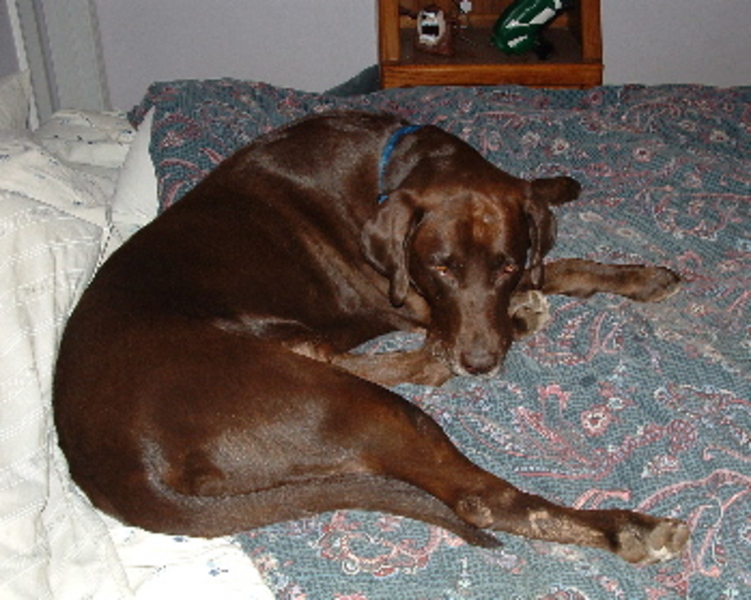 Winston came into LRR at the end of December. His family was military and had to move. Unfortunately they couldn’t take Winston, so they took him to the shelter where LRR got him. When he first came into the system, he was over 50 lbs overweight, so he went to our resident fat-farm where he lost 40 lbs! He began to find his energy again and became a voracious retriever, inside and outside of the house. Winston was so endearing that two foster homes gave serious thought to adopting him! Thank goodness that neither did, because Winston found his perfect home with an older labby sister, Fergie (who has just recently passed away) and two great parents. The following are several mails that LRR has received from Winston’s new family

Winston is doing great and he is GREAT! We really love him. Fergie is doing okay - they’ve only had one little tif and it involved food. We’ve taken them for walks together and she “protects” him from other dogs - it’s too funny. She’s warming up to him more and more each day. Yesterday I came home and caught her sleeping next to his crate whereas she usually sleeps on the chair or her bed. So I really think she is warming up. She appears a bit “scared” of him but I think that has to do with her physical abilities. She’s not as physical as she used to be because of the joint disease, so she keeps her distance, but that is changing daily.

We have noticed that the only time he puts down a toy from his mouth is if food is around - it’s pretty funny. He is very obedient too. When it’s time to stop playing fetch, we tell him “last one” and he appears to understand and walks right into the house. He’s a very good boy. With all this rain it’s been hard to play outside so we play fetch in the house with the soft toys - that works for him. He met several of our friends last night and was wonderful. He greeted them all with a toy! haha!

He lays on our bed when we are getting ready for work - very cute! I think this is going to work out. We really love him and Fergie is growing to love him. I “spy” on them when they don’t know I watching and they appear to be enjoying each other company. Time will tell.

Fergie has a vet appt. on Friday at 6pm so we’re taking Winston along for the ride (not to see the vet) just for the trip. He’s doing fine being out. A Jack Russell Terrier caught up with us on our last walk and kept pestering Winston, but he was very good and just left him alone. This is where Fergie tried to “protect” him! It was too funny.