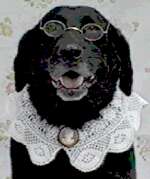 Hi, I’m Labigail Van Retriever, but you can call me Dear Labby. As one of the oldest and wisest labs in LRR, I have agreed to answer dog questions that have stumped you humans for many ages. I will attempt to explain crazy lab behavior and give you bipeds some insight into why we quadrupeds do the things we do. We will also discuss the joys (and sometimes frustrations) of new dog ownership and health, especially as it relates to us second chance canines.

Gee, it’s summertime, again! Time for hiking, camping, sports, swimming, BBQs, and travelling. Don’t forget us labbies like to join you, but be sure to bring along plenty of water and sunscreen for us too to prevent dehydration and sunburn (which can lead to skin cancer for us too!) Keep us up-to-date on our vaccinations, especially rabies, in case we meet any unfriendly critters in our travels. Heartworm protection is a MUST – so keep those annual visits and administration of daily or monthly heartworm preventative ongoing. A thorough exam of our pads after a jog or walk is a good idea to remove any thorny, rocky or sharp objects that might have embedded themselves. (And, try to keep those exercise periods a little shorter and done in the early morning or evening when it is cooler.) If you have recently adopted a dog, don’t assume he/she is in shape. Build an exercise program gradually – for those of us who were constantly chained, for example, we would not have much muscle mass or endurance. You know how food motivated we labbies are, so keep an eye on us around grills. Don’t forget that leaving us in the car even for a few minutes can be deadly! Wow–all of this talk of heat has made me really warm. Think I’ll go take a nap on top of the air conditioning register!

The ticks have been awful this year. I seem to be picking them off my labby constantly. Since we like to do tracking in overgrown fields, it got me to thinking about tick-borne diseases. I’ve heard of Lyme Disease. Are there others?

My people began picking ticks from my body in early Spring, which prompted them to start my flea and tick treatment. Ticks are hitchhikers and often wait at the top of the blades of grass to hop onto any living thing that walks by. When you and your labby spend any time outdoors, whether it be your back yard or your tracking field, always do a tick check on your dog and on yourself. Experts estimate that a tick needs to feed about 24 hours on a dog before a disease is transmitted, but better to make sure any stay by ticks on you or your labby is a very brief one. Because of the chance of infection, try never to use your bare fingers when picking the ticks. Use gloves, a tissue, or tweezers and remove as much of the tick as possible. There are even special tick removal gadgets sold in pet supply stores and catalogs. When tracking in those overgrown fields, you may want to dress in very light clothes, so the ticks are more readily seen. Wear long sleeves and long pants, and tuck your pant legs into your socks to help keep them from crawling inside your clothes.

Ticks can transmit a host of nasty things, but there are three major tick-borne diseases that we dogs can catch: Lyme Disease, Ehrlichiosis, and Rocky Mountain Spotted Fever. In consulting my vet and a number of canine veterinary books and newsletters, I put together some basic information on each. Bear in mind, that all canine maladies affect us doggies differently and in varying degrees with varying symptoms, so always take your labby to your vet at the first sign of a problem.

In recent years, Lyme Disease has heightened in public awareness because of its rising incidence in humans. While the deer tick was originally the main culprit spreading this disease, other ticks, including the common brown dog tick, have also been named as Lyme carriers. Very recently, fleas and other biting insects have also been found capable of infecting people and dogs with this disease. There are also incidents in which direct contact with infected body fluids have also transmitted Lyme’s (another reason to pick those ticks carefully). This ease of transmission has made Lyme Disease one of the most common tick-borne diseases that has spread to most states. Signs of Lyme in us doggies include loss of appetite, lethargy, high fever, swollen lymph nodes and joints, and sudden lameness. (This lameness often goes away on its own only to recur later if left untreated.) Kidney and heart disease can also occur in later stages. The “bulls-eye” redness around the infection site that is common in humans is also possible, but very hard to see under all of our fur. Diagnosis is based on exposure to ticks, symptoms (especially lameness) and blood tests. Rapid treatment is essential to prevent permanent damage to joints or internal organs. Antibiotics, often doxycycline, are generally used to treat Lyme, and acute symptoms will often disappear within two days of therapy. Long-standing infections may need a more vigorous treatment program. A canine Lyme Disease vaccine is available. After the initial immunization, a booster is recommended three weeks later, followed by an annual re-vaccination. There is also disagreement amongst vets on the efficacy of the vaccination, but many experts recommend the shot if the dog is living near and exposed to heavy infestations of ticks. Do bear in mind that if your dog does receive Lyme vaccinations, you may want to get a baseline Lyme test while he is healthy. That way, if you suspect that your dog may have picked up Lyme Disease later, you will be able to compare the two tests to verify if the blood test is showing true Lyme Disease or simply the vaccine.

Rocky Mountain Spotted Fever is another tick-borne disease shared by humans and dogs. Many different tick species, including the brown dog tick can carry the bacteria that causes this disease (which is not confined to the West). Sporting dogs (including us labs) are the breeds most prone to this disease (and most tick-borne diseases) because we more frequently visit tick-infested areas. Symptoms include high fever, swollen lymph nodes, pneumonia, seizures, bleeding, abdominal pain (including vomiting and diarrhea), and bruising of the skin and mucous membranes. RMSF causes an intense inflammation involving the blood vessels throughout the body. In the later stages, the disease is characterized by an increase in the number of circulating white blood cells. This unique sign can help a vet distinguish RMSF from other tick-borne diseases. Specific antibody tests can also be used for diagnosis. High levels of tetracycline are generally given for a minimum of two weeks. Response to treatment is slow, and recovery often takes time. One of my closest labby friends died from complications of RMSF (hemorrhaging in the lungs), and she lived in suburban Maryland! Her vet said hers was the ninth case in this area, and unfortunately she was the fifth to die. Since then, more cases of RMSF have popped up all over the metro DC area. Because of the hemorrhaging factor, it is important not to give us any aspirin. Sometimes, the initial stages of tick-borne diseases, including RMSF, can mimic joint pain that you might suspect was a result of your dog playing too hard and hurting a joint or may look like a bout with arthritis or dysplasia. Your first thought may be to give us an aspirin, ice our affected joint, and rest it for awhile. But the aspirin could do more harm than good in RMSF. If you suspect ticks were involved at all, get us to the vet immediately, and make sure we are tested for all possible tick-borne diseases!

Ehrlichiosis, also known as canine typhus, is beginning to get more press as more cases are diagnosed. While this disease is most prevalent in Midwestern and Southern states, it is transmitted by the brown dog tick which is found throughout most states. Of all tick-borne diseases, Ehrlichiosis can be the most deadly if left unchecked. The ehrlichia canis bacteria invades various organ systems almost invisibly. Acute signs of infection include general depression, weakness, fever, appetite and weight loss, eye and nose discharges, and swollen lymph nodes. Because these symptoms can be mild or indicative of less serious ailments, and we often feel better after a few days, the acute phase can often go unnoticed. Meanwhile, the organisms begin to infect our bone marrow, interfering with our clotting mechanisms and infecting the cells that produce red and white blood cells and platelets. During this chronic stage of the disease, we will begin to become anemic, immunosuppressed, and often have secondary pneumonia, nose or gum bleeds, and bruising of the skin. Finally, if left untreated, the kidneys and brain might become affected leading to kidney failure and nervous system disorders. Ehrlichiosis is ultimately fatal. It is essential that dogs be diagnosed and treatment begun as early as possible as some of us in the chronic phase do not recover. Specific blood tests for ehrlichia canis antibodies are the most reliable method of detecting this disease, but the tests are expensive and not always available. Noticeable drops in the total number of red and white blood cells and platelets can also tip off vets to this disease. Because the organism can hide within the blood cells and bone marrow, Ehrlichiosis is difficult to treat. Very high doses of tetracycline or doxycycline are given until clinical signs go into remission. Chronic infections may also call for occasional blood transfusions. A new experimental drug, imidocarb diproprionate, has been moderately successful in treating dogs in the chronic phase, but it is still being tested. Additional antibody blood tests can determine if the treated dog has recovered from Ehrlichiosis. Recovered dogs do not become immune to this disease, and there is at present no vaccine against it. Because of the severity of this disease, its potential to cause death, and its difficulty to both diagnose and treat completely, tick control is mandatory.

Ticks can be hosts for a number of diseases, as well as cause local irritation, anemia in heavy infestations and even temporary paralysis. Unlike fleas or mosquitoes, we often don’t even know they’re attached. That’s why we depend on you to make sure we are tick free. Thanks for doing all those “tick picks”! And thanks for rescuing your labby and doing fun things with him like tracking. I’m quite the tracker myself, but mostly of items in the waste basket!